Drivers of Greenhouse Gas emissions in Africa: Focus on agriculture, forestry and other land use

Greenhouse Gas (GHG) emissions have been rising globally despite the intervention of a wide array of multilateral institutions and national policies aimed at mitigation with varying levels of ambition.  According to the World Resources Institute1 (WRI), emissions reached a global total of almost 50 gigatonnes CO2-equivalents per year (GtCO2eq/yr) in 2016. Of this, 73% of GHG emissions emanated from the energy sector, 18% from Agriculture, Forestry and Other Land Use (AFOLU(link is external)) (of which 12% came from agriculture), 6% from industrial processes, and 3% from waste management activities.

The energy sector has been a major contributor to this growth, with its share of emissions increasing from 66% in 1990 to 73% in 2016. Of the other sectors, agriculture and waste had relatively minor increases, while industrial processes increased significantly - doubling its relative weight (from 3% in 1990 to 6% in 2016). Over the same period, AFOLU2 sectors decreased significantly in relevance, falling from 27% in 1990 to 18% in 2016.

The world is far from achieving the GHG emissions target to keep global temperature rise below 1.5 - 2ºC, as agreed in the 2016 Paris Agreement on Climate Change (see figure 1). For this to happen, emission reduction efforts would have to be much more significant: needing anywhere from 25% to 55% lower emissions in 2030 from that pledged in current Nationally Determined Contributions (NDCs) – commitments made by each country under the Paris Agreement. 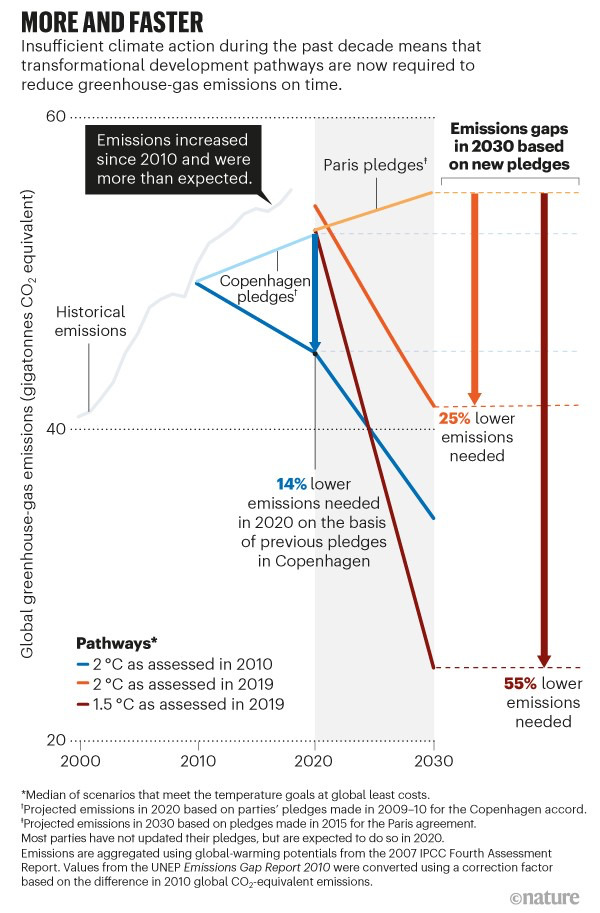 Where does Africa feature in this global emission context and what are its key GHG emission drivers?

Historically, GHG emissions in Africa as a whole have been dominated by the AFOLU sectors, represented by the difference between carbon sequestered through photosynthetic (forests and savannas) and non-photosynthetic processes (soils and water) (sinks), and carbon released into the atmosphere as a result of agricultural practices, deforestation, fires and forest degradation (sources). They represented 56% of the total emissions in 2016. There is, however, a significant difference between the north African region and Sub-Saharan Africa: in the former, AFOLU contributes with a small, negative balance (more sequestration than emissions), in the latter, and even though its relative contribution has decreased thanks to Land Use Change and Forestry (LUCF) activities, it still represents the majority of emissions (56% of the African total in 2016 from 71% in 1990) (see figure 2).

Land use and management influence a variety of ecosystem processes (e.g. growth and respiration) that affect greenhouse gas fluxes. However, despite the increasingly acknowledged importance of African AFOLU sectors’ emissions in the global carbon cycle, there is still a lack of studies and very few inventories or observations, particularly over tropical forests and savannah woodland (Lewis S. L., et al. 2009). In this sense, and according to the Intergovernmental Panel on Climate Change (IPCC), AFOLU emission changes are reported across different databases with high levels of uncertainties related to data. 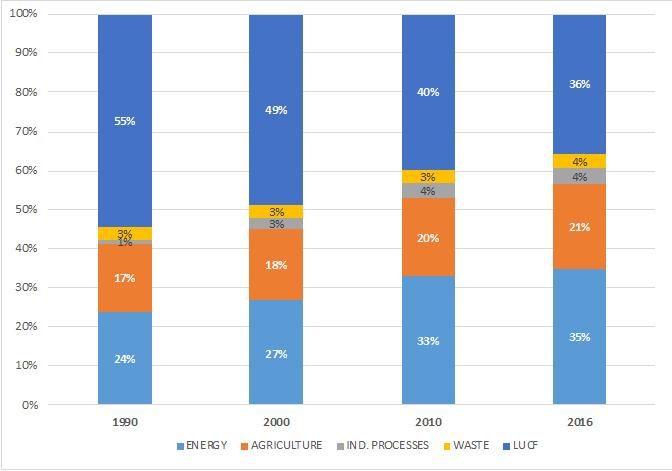 What are its implications for Africa?

Mitigation efforts in African countries’ NDCs should give priority, or at least equal footing, to AFOLU emission reductions to contribute to global efforts to reach the goals of the Paris Agreement in terms of curbing average global temperature increases. According to the IPCC (2014), the main mitigation options within AFOLU involve one or more of three strategies:

What are the perspectives and strategies of the African Development Bank?

AFOLU has been and still is the most significant source of GHGs in Africa.  However, energy is gaining momentum in relative and absolute terms as the second-largest source, showing a trend that indicates that it might become as relevant as AFOLU shortly as Africa grows and industrializes. The African Development Bank is well-positioned to support its regional member countries (RMCs) to access technology and climate finance necessary for them to transition to renewable energy, away from fossil fuels.

AFOLU emissions may increase through unsustainable land-use change and management strategies, such as deforestation, increased fertilizer use, and the expansion in agriculture for food supply, particularly rice production. There are huge research gaps related to the interaction between land uses, climates, soils, and ecosystems, resulting in poor understanding of Africa’s contribution to global GHG emissions. There is an urgent need to address the data gap, and the Bank’s support to Africa’s NDCs should include the development of up-to-date, evidence-based information on emissions contributions in Africa by sector. Implementation of the Bank’s GHG accounting tool can also provide reliable information on the type and scale of emission reductions from Bank projects in different sectors.

In agricultural systems, the addition of crop residues and the use of manure and synthetic fertilizers are a source of significant emission flows. However, agriculture is also part of the solution, offering promising opportunities for mitigation through carbon sequestration, improved soil and land-use management, and biomass production. Bank-funded agricultural projects should give more emphasis to the promotion of modern agricultural practices such as agroforestry, climate-smart agriculture and organic farming, which can lead to a reduction in CO2 and N2O emissions and contribute to the mitigation of GHG emissions.

African countries, where AFOLU activities represent a large portion of national economies, are particularly at risk from climate change, and may benefit significantly from receiving climate funding for strategies that link GHG reduction to resilience, food security and rural development goals. To this end, the AFOLU sector may benefit from the Bank’s support to RMCs in their efforts to access resources from the Green Climate Fund, including for Reducing Emissions from Deforestation and Forest Degradation (REDD).

Ethiopia zooms in on Public Diplomacy with the U.S

Decentralized Energy Solutions Innovation Competition to Be Launched in Ethiopia